Thank you for your patience while we retrieve your images.

20121207- 2012 Brechin Guildry Dinner.
The top table guests are pictured (back left to right) Hamish Greig, Paul Roberts, Brian Titmuss, Mark Reynolds, Alan Budge, Angus Callegari and Michael Howard with (front) The Earl of Dalhousie, Tim Ambrose, guest speaker Norman Atkinson, Dean of Guild Stewart Hill, guest speaker Professor Ken Brown, James Hawke and Kennedy Dalton.
The Dean of Guild, Stewart Hill, welcomed a large company of Guildrymen and guests to the Annual Dinner of the Guildry Incorporation of Brechin in the Mechanics Institute on Friday evening.
Norman Atkinson, Cultural Services Manager for Angus Council proposed the toast to "The City and Trades of Brechin" and the reply was given by Guildryman Tim Ambrose.
The toast to "The Guildry of Brechin" was given by Professor Ken Brown, Emeritus Professor of Psychology, Queen's University, Belfast, with the reply from the Dean of Guild.
Ex-Dean of Guild James Hawke proposed the toast to "Our Guests" and guest Kennedy Dalton, Lord President of the Court of Deans of Guild Scotland, replied on their behalf.
The final toast of the evening was "The Dean" proposed by Lord Dalhousie, Guild Fiscal.
The Guildry Incorporation of Brechin was formed in 1629 by "a number of merchants and maltmen", traders within the Burgh, and in 1666 the Incorporation obtained official recognition of its rights under Decree of the Convention of Burghs.
Guilds, including the crafts of the hammermen, glovers, shoemakers, bakers, weavers and tailors flourished for a couple of centuries but have now ceased to exist.
The Guildry Incorporation of Brechin is however, still very much alive. Although its ancient functions have lapsed. It has taken an active part in the civic and social life of the community for more than three centuries and it continues to do so.
The Guildry calendar includes the "Kirkin o' the Guildry" ceremony in Brechin Cathedral in early Summer, attendance at the Remembrance Day Service in the Cathedral in November an
No EXIF information is available
© Andy Thompson Photography 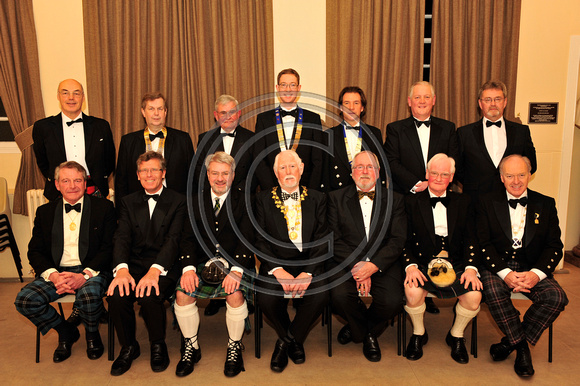